A subscription makes it easy, plus it is the key to a number of benefits. We want you to thrive and let Konserthuset Stockholm become your extra living room. Our series Orpheus Baroque includes 4 concerts, not the Messiah which is booked separately. You can secure your place by buying the concert series right now - in addition with  25 percent off the ticket price. A series for baroque lovers! Four Sundays at 16:00 in the Grünewald Hall.

Read more about the subscription.

Handel's Messiah 21 and 22 December  is not included in the subscription Orpheus Baroque.

Since its formation in 2015, Orpheus Baroque Stockholm has grown into an important part of the musical offering, serving as a meeting place for philharmonic musicians and for Sweden’s foremost Baroque musicians.

Through its own concert series in the Grünewald Hall, the ensemble has developed into a dynamic and creative meeting place for members of the Royal Stockholm Philharmonic Orchestra with expertise in early music, as well as many of Sweden's leading freelance baroque musicians. The ensemble works to make the profane musical treasure during the period 1600 - 1850 available with playing on period instruments and a historically informed playing style.

The group's debut CD with music by JS Bach and CPE Bach was released on Alba Records 2020, praised by critics and nominated for a Grammy award in the category "Classic of the Year".

NOMINATED FOR THE "SWEDISH GRAMMIS AWARD" 2021 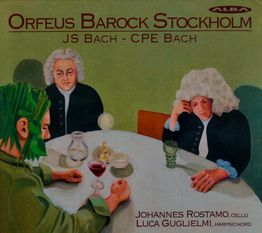 In this concert video we will see the artistic director of Orpheus Baroque and The Royal Stockholm Philharmonic Orchestra’s solo cellist Johannes Rostamo as the soloist in Carl Philipp Emanuel Bach’s temperamental Cello Concerto in A-minor. Luca Guglielmi leads Orpheus Baroque Stockholm from the harpsichord.

ABOUT THE CHALUMEAUX CONCERT

ABOUT THE BACH CONCERT (in Swedish)

ABOUT THE RAMEAU CONCERT

The concert, a delightful performance of French Baroque music, was warmly applauded by the audience, who were clearly long overdue for a session of Baroque music, which is in short supply here in Stockholm. Perhaps a quote from Oliver Twist best sums up the feeling of Stockholm’s Baroque music lovers: “Please, sir, I want some more.”